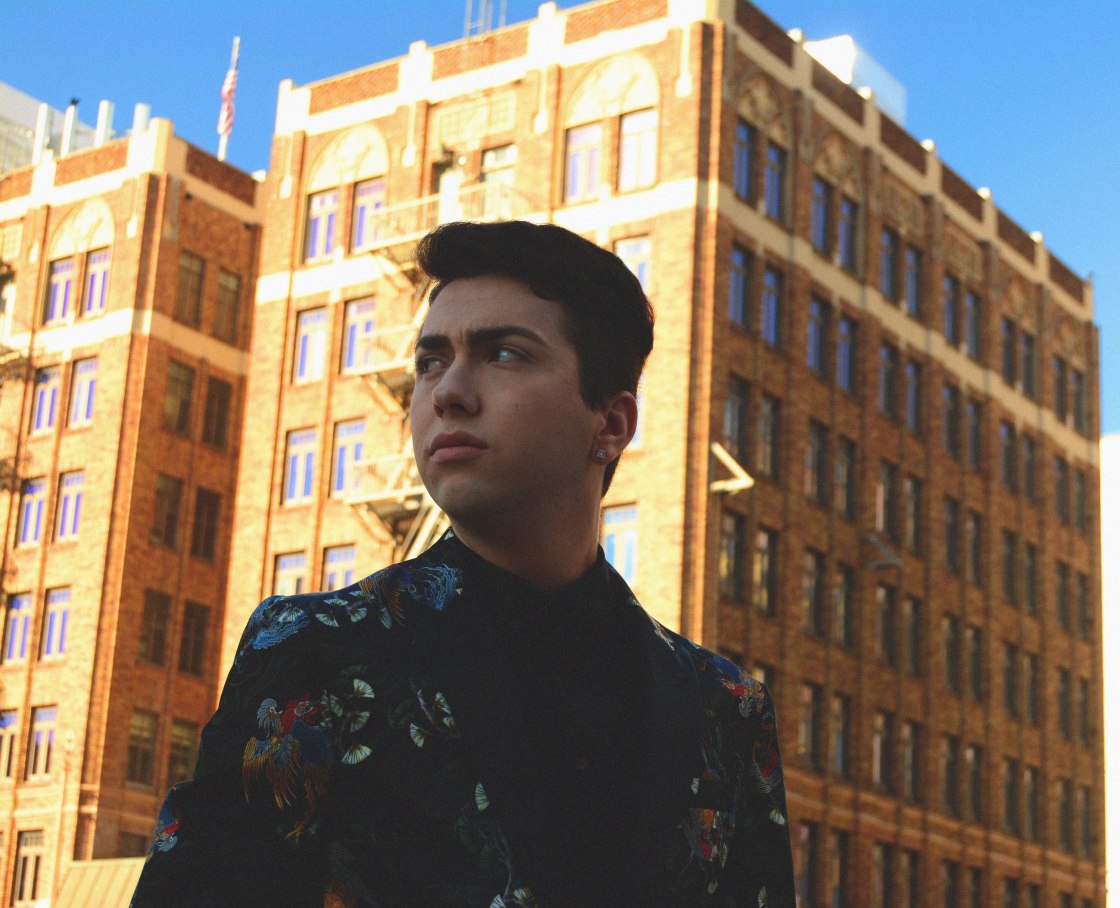 Recently I had the opportunity to sit down and chat with San Diego musician and burgeoning pop-star Tim Connolly, who performs under the moniker “My Name Is Chapel”. At 23 years old, Connolly is a self-taught, piano-driven singer-songwriter with the heart and soul of someone far beyond his years. His lyrics resonate with the multitudes among us who’ve experienced the rush of a first-love as well as gut-wrenching heartbreak. His music also explores themes regarding his identification as a gay man while growing up in conservative suburbia. No stranger to challenges, Connolly also spoke about his childhood diagnosis of AD/HD and how it affected him both academically and emotionally. Over a cup of coffee at his favorite cafe/live music venue, Lestat’s on Adams, we discussed his song-writing process, the inspiration behind his energetic live shows and the methods he employs to get the most out of his beautifully creative mind.

Busy Blue Eyes:  How did you know you wanted to be a musician? By that I mean a creator or musical artist – anyone can learn an instrument but there’s a clear divide between knowing how to play something and being a musician.

My Name Is Chapel: I’ve always loved music. My mom loves to tell people how I sang songs from The Little Mermaid before I could speak – and that when I could, I learned all the words to Colors of the Wind when I was two. But what made me want to seriously pursue music was listening to Sara Bareilles, Lady Gaga and Amy Winehouse while I was growing up. I’ve always had an innate desire to perform, but learning to sing and play their songs made me want to create my own.

BBE: You were diagnosed with AD/HD when you were 11 years old, correct? What symptoms were you exhibiting that prompted a visit to the doctors and your eventual diagnosis?

MNIC: I was your typical hyperactive boy. I couldn’t sit still to save my life. I would speak really fast and my mind would bounce from idea to idea without ever forming a complete thought. I always tested really well on those “Honors” placement tests that they put you through in elementary school, but you’d never know it by looking at my grades. I would always lose my homework or important assignments because I was super disorganized, no matter how hard my parents tried to help me. It was just like I couldn’t “turn off” or “turn down” my energy levels to the point where I could concentrate for ten minutes to do an assignment or just retain information. More than anything, AD/HD is enormously distracting. It can really inhibit you from doing basic, everyday tasks – simply because you can’t focus long enough to complete anything.

BBE: Do you think that having AD/HD caused you to develop any secondary cognitive challenges, like anxiety or depression?

MNIC: I was never diagnosed with anything other than AD/HD and I don’t feel that I developed anxiety or depression because of it. I can definitely see how someone could though, particularly if their AD/HD is undiagnosed. It may be a learning disorder but it’s also a very real and debilitating mental “block”. I’m lucky that I was diagnosed while I was still young because it undoubtedly gave me a better handle on it as I grew up.

BBE:  If you could describe the way you think or your primary thought pattern in a few sentences, what would those be?

MNIC: I would say that my thinking is almost improvisational, if that makes sense. I’m very quick on my feet and I’m often responding to something someone has said before I’ve even fully thought out the response. Luckily, it works out most of the time. LOL

BBE: How do you think that plays into your musical/performance abilities?

MNIC: I think it helps a lot with songwriting. I go with my gut, instead of lingering on whether or not something works. It helps me create more genuine art. As far as performing goes, I think it’s the backbone of why my shows are entertaining outside of the songs. I respond very well to the audience, and am (usually) able to land a few jokes that way.

BBE: What kind of learner are you? Are you a spatial, kinetic, visual, auditory learner? Or something else entirely?

MNIC: Visual, for sure. There’s a reason I love movies so much.

BBE: When recalling things like to-do lists, or places you’ve been or even academic work, do you find yourself looking at a picture in your head of whatever you’re trying to remember? For example, when I’m trying to recall how a word is spelled, I see a very vivid picture of it in my head, and then I can write it out.

MNIC: Oh for sure! I’m definitely the same way. I’ll also walk through a location and remember the conversation I was having with someone else the last time I was there. A visual memory can get distracting sometimes but overall it’s an incredibly useful tool.

BBE:  Because you interact with your fans via Twitter pretty regularly, do you find that you have to sensor yourself at all? Or does it have that big of an impact on your daily life?

MNIC: It doesn’t do too much to my day-to-day to life. Although one of the things it’s definitely done is make me a little more conscious of what I put online. Most of them are quite young, so I try to not be to be too much of a bad example. *laughs*

BBE: Do you have a mental ritual/ on-off switch you have to use to switch between My Name is Chapel and Tim Connolly – or do the two personas coexist?

MNIC: They’re definitely the same. I feel like I’m a relatively “you get what you get” type of person. As much as I give a show, there really isn’t a “show” with me and how I interact with people. When I’m onstage I’m completely myself, and I think the audience can sense that. I’d like to think that by being as authentic as I can, my performances become that much more engaging and relatable. Chapel is just a name. I’m still Tim. But I will say that my stage name can feel a bit like armor, which is nice, too. And of course I’m more eccentric and out-loud when I’m performing, but I’d say that’s a standard for most artists.

BBE: What self-care rituals do you practice?

MNIC: It’s not so much of a ritual but, I don’t write music when I feel like I’m being forced to do it. I create my best work when I’m riding a wave of an emotion or urge or inspiration that I’m genuinely feeling. Songwriting also helps a lot when I’m feeling frustrated or emotional. It helps me get it all out. As far as the Instagram definition of self-care goes, I take bubble baths a lot. I know that’s kind of cliche but taking a bath has become really essential for me. I use that time to sort of decompress and isolate myself a bit so that I can re-charge and quiet my mind.

BBE: Do you feel the need, or rather, exterior pressures to censor/tone down your onstage persona because you are an openly gay singer-songwriter?

MNIC: I used to when I was younger, but I’ve embraced it in my performances as an adult. I kind of love when I’m playing a venue with a lot of people who have no clue who I am and I can tell some of them are a little uncomfortable with me. I think it’s funny. I usually playfully pick on them a bit during the shows. Sometimes it works, sometimes it doesn’t.

BBE: Is your songwriting process spontaneous or do you put aside dedicated time to write?

BBE:    Do you prefer to write songs/ideas on your computer/phone or handwritten?

MNIC: If I’m out and about, I’ll definitely write on my notepad or make voice memos on my phone. But at home, if I’m sitting at the piano, I hand write. That way if I cross out an idea or line, I can still see it later when I look back at the song, versus typing where deleting something means it’s gone forever.

MNIC: “Vienna” by Billy Joel. The piano, the lyrics, the melody, all of it! The message really resonates with me. Sometimes we’re way too hard on ourselves and that song is the perfect reminder to just slow down once and awhile.

If you’d like to learn more about My Name Is Chapel, follow him on Instagram and Twitter as well as his website. If you’d like to see him perform live (which I HIGHLY recommend!) he’ll be featured at the San Diego County Fair on Friday, June 7th on the O’Brien Stage as well as Friday, June 14th on the Paddock Stage. His debut album, Empire State, can be found on Spotify and iTunes.